Peel Regional Police say two pedestrians have been hit by multiple vehicles in Brampton, Ont., early Friday, and one of them has died.

Emergency crews were called to Heritage Road and Steeles Avenue at around 5:45 a.m. for reports of a pedestrian hit by a vehicle.

Police said one of the two pedestrians, a woman, has died due to the collision.

“That second vehicle is the one that we’re looking for,” Khatra said, adding that the vehicle is described as a mid-sized SUV.

“She was struck again by a third vehicle that remained on scene,” Khatra added. 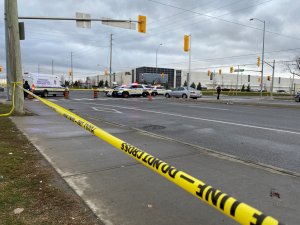 The second pedestrian involved was trying “to help the first victim and was struck in the process.”

Police said the intersection is closed in all directions and “will remain so for (an) extended period.”

Family of the woman killed said she worked at an Amazon fulfillment centre and had just gotten off work when she was struck.

FATAL COLLISION
-Heritage and Steeles #Brampton
-2 pedestrians struck, 1 is deceased
-intersection closed in all directions and will remain so for extended period
-avoid the area
-MCB enroute
-C/R 5:46 AM
-PR22-0391797

In a statement to Global News, Ryma Boussoufa, a spokesperson for Amazon Canada, said the company is “deeply saddened to learn of the passing of our colleague, and we offer our heartfelt condolences to their loved ones.”

“Our thoughts are also with our employee who is currently in hospital,” Boussoufa said. “We are providing support resources for the victims’ families and our workforce.”

Boussoufa said the company is also “offering our full co-operation to local authorities.”