The Winnipeg Blue Bombers returned to practice for the first time since their season opening victory and starting quarterback Zach Collaros was on the field with the rest of his teammates.

Despite being forced to leave the game after taking a huge hit late in the fourth quarter, Collaros was still a full participant on Tuesday.

Collaros showed no ill effects as he was running the first team offence less than 96 hours later. It’s listed as a neck injury on the official injury report and Collaros, who has a long history of concussions, said he wasn’t dazed by the hit.

“Just a football hit,” said Collaros. “Something that happens often in the game.”

Fearing he had suffered another head injury, the league’s concussion spotters had him removed from the game to be evaluated by medical staff, which took the decision right out of his hands.

“I wasn’t very happy about it obviously,” he said. “But they made the call from Toronto and I think it was Al (Couture, head athletic therapist) who came over to tell me, and it is what it is.

“I guess they look for if you grab your helmet. So, I touch my helmet often so that’s not a great indicator, I guess. But, yeah, they took me off, evaluated me. The three plays was up, but by then we were already down the field.”

The Bombers will be without third string quarterback Dakota Prukop for the foreseeable future, though. The Bombers placed Prukop on the six-game injured list with an undisclosed injury. Prukop handled short yardage situations and was also their holder on place kicks in the season opener.

But the Bombers defence could be getting a boost this week with the arrival of defensive end Jackson Jeffcoat from the one-game injured list. Jeffcoat was at practice as a full participant after missing a good chunk of training camp and their first game of the regular season due to an ankle injury.

“It’s always frustrating to miss any games at all,” said Jeffcoat. “So, I’m just amped up and hopefully get the opportunity to go.”

He has proclaimed himself fit to play in this week’s rematch against the Ottawa Redblacks.

“If they let me go, I’m ready, I’m excited,” he said. “It’s like riding a bike when you get out there and play football. I’m just excited to hopefully get the chance.”

“He practiced today and we’ll see tomorrow how he feels,” said head coach Mike O’Shea. “We usually give them ’til the morning to talk to Al and see what it looks like.” 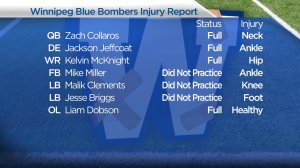 The Bombers face the RedBlacks in their week two matchup on Friday starting at 6:30 p.m. central time.