More than two years after the Winnipeg Blue Bombers were crowned Grey Cup champions, the Hamilton Tiger-Cats are hoping to take over the throne as kings of the Canadian Football League.

The two clubs will meet Sunday night in the 108th Grey Cup at Hamilton’s Tim Hortons Field, marking the first time since 1996 that the CFL’s title game will be held in Steeltown.

“We took a different path here and it’s been a roller coaster ride, but it’s been enjoyable,” said Tiger-Cats head coach Orlondo Steinauer.

Hamilton won a franchise record 15 games in 2019 but fell in the Grey Cup to the Blue Bombers, which went 11-7 during the regular season.

Fast forward two years, after the COVID-19 pandemic wiped out the 2020 campaign, and the roles have been reversed.

Winnipeg registered a league-best 11-3 record, scored the most points and allowed the fewest in 2021, while Hamilton had an up and down season, finishing 8-6 while dealing with a number of injuries.

“Completely different season,” said Blue Bombers head coach Mike O’Shea, as he reflected on the comparisons between 2019 and this year.

O’Shea has been through many battles on the field, and on the sideline as a coach, and understands that regular season success doesn’t always translate into a trophy at the end of the year.

“Nothing’s guaranteed, if you don’t stick to your process and put the work in, it doesn’t matter, right? There’s no carrying your regular season record into the postseason, it just doesn’t work that way.”

Steinauer was quick to announce Dane Evans as Hamilton’s starting quarterback following the 28-year-old’s exploits in the Eastern Final last Sunday in Toronto.

Evans, who was the starting QB in Hamilton 33-12 Grey Cup defeat two years ago, completed all 16 of his pass attempts for 249 yards and produced three touchdown drives in a come-from-behind win over the Argos.

He is hoping for a better performance in the Grey Cup this time around after going 16 of 27 for 203 yards while throwing one touchdown and two interceptions in the 2019 championship game.

Adversity struck the Cats on Friday when news broke that veteran defensive tackle Ted Laurent had undergone an emergency appendectomy in hospital and will miss the championship final.

Laurent recorded 14 defensive tackles in 13 games this season and will be replaced by rookie defensive lineman Lee Autry who played in four games this year.

Winnipeg has enjoyed one of the best seasons in its 91-year history, having 15 players named to the CFL’s All-Star Team.

Blue Bombers players were also nominated for five of the seven CFL individual awards, including QB Zach Collaros, who beat out Montreal Alouettes running back William Stanback for the Most Outstanding Player Award.

Collaros led the lead with 20 touchdown passes and finished the regular season with the second most passing yards (3,185). 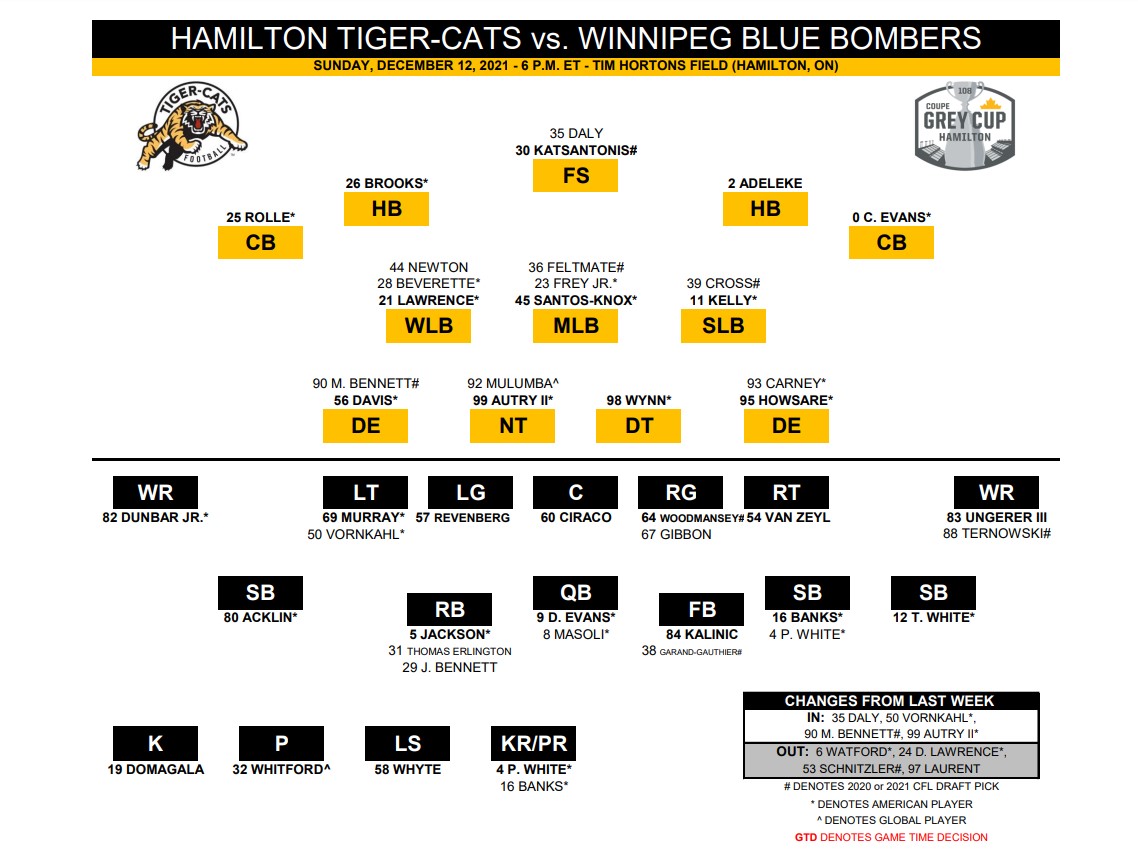 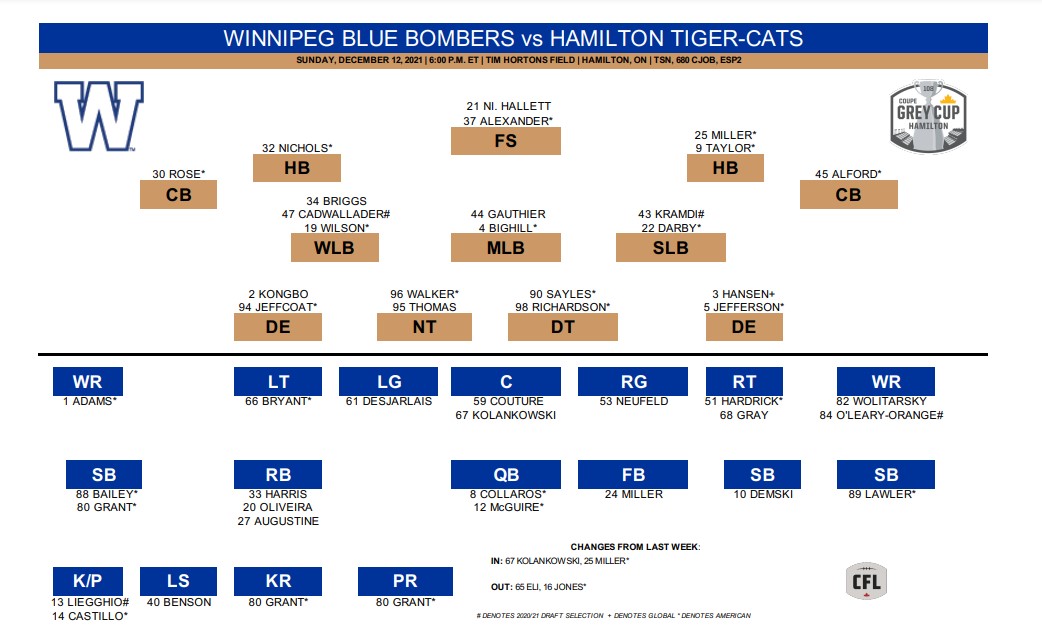 Sunday’s game will include two of the league’s best defences, powered by three of the most talented defensive ends: Winnipeg’s Jackson Jeffcoat and Willie Jefferson, and Hamilton’s J’Gared Davis.

The Ticats and Bombers kicked off the CFL’s abbreviated 14-game season on Aug. 5, a game in which Winnipeg won 19-6.

Since 1972, which is the last time Hamilton won the cup while playing on home turf, home teams playing in the Grey Cup are 6-5.

Hamilton’s Arkells will play the halftime show alongside The Lumineers and K.Flay.

Trust us. The tape on the floor represents the stage. And instead of gymnasium walls there will be 26,000 people all around us. Rehearsals for @cfl grey cup all week long. pic.twitter.com/K4j7AMGriJ