Hamilton police will be setting up a large perimeter around Tim Horton’s Field on Saturday in advance of the Grey Cup game on Sunday.

Several streets surrounding the stadium will be closed off to vehicle traffic prior to and during the game.

City officials are encouraging fans to take public transit to and from the game. Game-ticket holders can ride for free.

Police Chief Frank Bergen says the area will essentially be “locked down for everybody’s” safety — open only to pedestrian traffic.

Grey Cup Week parties heating up in Hamilton ahead of Sunday

“We’ve had actually door-to-door-to-door conversations with the residents in the area and commercial establishments,” Bergen told 900 CHML’s Bill Kelly.

“Talking about access, talking about egress, making sure that that we have the ability to control and cordon off what will be a very large pedestrian access…plan.”

Full blocks around the stadium, including Beechwood Avenue, Melrose Avenue North, Cannon Street East, and Balsam Avenue North, will be closed off completely to everyone, even local traffic.

Only residents will be allowed in areas between Gage Avenue and Lottridge Street from east to west as well as Barton Street East and King Street East to the north and south. 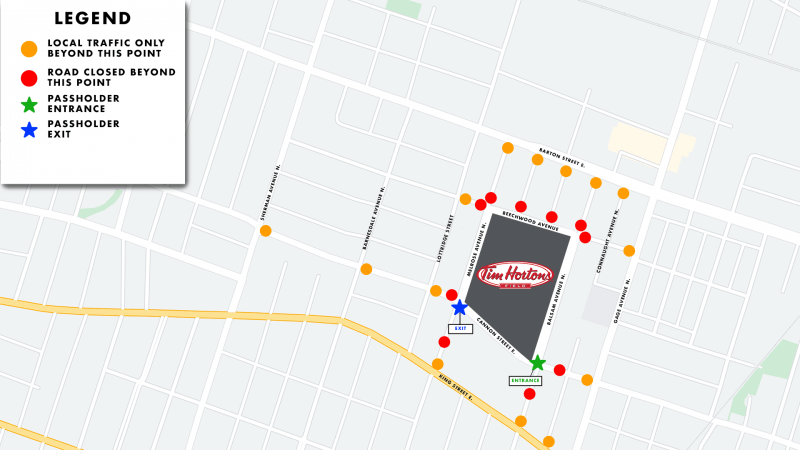 Bergen says parking on lawns as well as taxis will be discouraged from travelling within the perimeter.

“The reality is it’s going to be absolutely a move and a push to make sure that people can get there through public transit,” said Bergen.

On game day, transit pick-up & drop-off will be located on King St. E between Connaught Avenue North. and Lottridge Street.

The service will have four different lines going to and from the field, from different areas of the city, on Sunday:

Things to do at the 2021 Grey Cup Festival in Hamilton

Taxi’s & rideshare vehicles will be encouraged to drop off and pick up on Lottridge Street between Barton Street East and King Street East.

Fans with valid tickets to the Grey Cup game can board DARTS and HSRs regularly scheduled routes and shuttles for free at 3:30 p.m. on Sunday.

Although discouraged, there is some limited, sanctioned event-parking several blocks from Tim Horton’s Field.

The least expensive will be lots at Gage Park as well as the Lincoln Street lot at Linden Street north of Barton. Each will cost $15 for the game.

A lot at Lloyd Street and Gage Avenue North will run about $25.