ANALYSIS: Breaking down the competition for the final 4 forward spots on the Jets roster

If you’re a veteran with job security, it’s about shaking off the rust and trying to ensure you get through the exercise with full health and ready to attack the regular season.

If you’ve got limited experience — or are a first-time attendee — it’s about doing what you do best and trying to build the trust of the coaching staff — whether your opportunity will come right out of the gate or somewhere down the road.

When it comes to the Winnipeg Jets, the arrival of Nate Schmidt and Brenden Dillon in a pair of trades, the return of Paul Stastny in free agency and raises for Neal Pionk and Andrew Copp answered many of the questions when it came to roster construction.

But even when most of the roster spots are spoken for, that doesn’t mean there aren’t any interesting battles left to be won.

And through two exhibition games, following the Jets’ 5-1 win over the Edmonton Oilers on Wednesday, the process of trying to create some separation in the competition is beginning to take shape.

Hellebuyck is slated to play the final two exhibition games against the Calgary Flames, leaving Comrie and Mikhail Berdin to likely split the weekend tilts.

On defence, there are five incumbents (Josh Morrissey, Pionk, Dylan DeMelo, Logan Stanley and Nathan Beaulieu, provided there is enough cap space available after some LTIR gymnastics) along with the newcomers (Schmidt and Dillon).

Although Johnathan Kovacevic is doing a nice job endearing himself to the Jets coaching staff through two steady games, he’s basically working to slide up the depth chart on the right side and solidify his standing.

Ville Heinola is the other candidate and he showed well in Game 2, chipping in an assist while making several other smart plays.

The next step for him is to raise his level further as the quality of competition increases.

That brings us to the forwards, where the first eight spots are easy to identify.

Mark Scheifele finds himself with familiar linemates Blake Wheeler and Kyle Connor, while Pierre-Luc Dubois has been between Nikolaj Ehlers and Andrew Copp.

Adam Lowry is the man in the middle on the third line and he’s been paired with Stastny, while 2017 Kristian Vesalainen is being groomed to be the replacement for Mason Appleton.

With Jets GM Kevin Cheveldayoff saying the team is likely going to need to run a 22-man roster, that basically leaves four jobs up for grabs with the big club.

However, it’s important to remember that this is only the beginning of the competition and there is a block of players who are laying the groundwork for future recalls from the Manitoba Moose of the American Hockey League — even if they’re unable to secure a spot following the remaining four exhibition games.

“There is also a group of guys that are going to get into the NHL during the year more than they are during training camp because of waivers, because of all the things we have to do — for us especially, it’s going to be cap considerations — getting up to opening night,” said Maurice.

“Their chance comes in November. But even if they don’t, some of these guys that don’t make the team out of camp, their job is to be defined when they leave. So we can say, ‘I know what that guy does, I know what he looks like,’ not ‘I’m not sure what he’s trying to bring to the table.’

“That’s the training camp job, even if you don’t get a job out of camp, make sure that the coaching staff and management know what you’re selling so if we bring you up we know what we’re getting.”

Prior to Wednesday’s game, Maurice was asked if anything has stood out to him in the competition among the forwards.

“We haven’t been overly surprised, necessarily. The players that have come in have been (performing relative) to what we thought they would be,” said Maurice.

“The question is going to be, how do the pieces fit? Not necessarily an assessment of the individual pieces. Any of them probably could make the team, but how they function together is going to be the key. It may take us a little while until we find it.”

With that in mind, here’s a breakdown of the field of forwards on the bubble going into this weekend’s road games against the Oilers and Vancouver Canucks.

C/RW Riley Nash: Barring an unexpected change, Maurice has hinted he’s building the fourth line around the 32-year-old with 578 games of NHL experience. Although he’s also comfortable on the wing, Nash is a natural centre and is going to be leaned on for his ability to defend and he’ll also be a staple on the penalty kill.

C/LW Jansen Harkins: He’s off to a fantastic start, chipping in two goals and four points through two exhibition games. He’s exuding confidence with and without the puck and making smart reads at both ends of the ice as he looks to bounce back from a frustrating 2020-21 season. 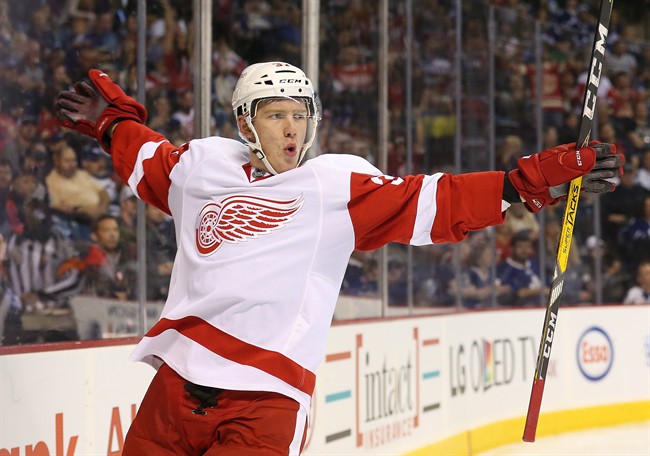 RW Evgeny Svechnikov: Although he remains on an AHL deal for the time being, there have been ample signs that the 19th-overall pick in the 2015 NHL draft by the Detroit Red Wings has been adjusting nicely to his new surroundings. He’s been able to use his size and offensive abilities so far. Although it’s his shot that has stood out, he delivered a deft redirection on Wednesday as part of a three-point game. He’s comfortable playing on his off side and it’s clear he’s a player with something to prove.

C/LW Dominic Toninato: Limited to only eight total games last season after dealing with a bout of COVID-19, the 27-year-old from Duluth, Minn., is working to secure regular work on the fourth line. He was the Game 1 hero in the opening round against the Edmonton Oilers, producing the game-winning goal on a nifty redirection. He’s got 87 NHL games on his resume and is looking to establish himself in a checking role and is a candidate to fill a role on the penalty kill as well.

C David Gustafsson: Coming off a season where he was named MVP of the Moose, the 2018 second-rounder is determined to make the jump. His defensive acumen and penalty-killing ability are obvious assets in his quest for full-time duty and he spent the off-season working on improving his skating and shot. His offensive game took an important step last season as he recorded seven goals and 19 points in 22 games in the AHL. Gustafsson, who has appeared in 26 games with the Jets, is known for making the players around him better and he’s been doing that so far.

Cole Perfetti: The 10th overall pick of the 2020 NHL draft has been showcasing his talent and instincts throughout training camp and the first two exhibition games. He’s mature well beyond his years and the benefits of getting his first pro season in the AHL under his belt during the pandemic are quite apparent. He could be one of the beneficiaries of Scheifele having to sit out the season opener to serve the final game of his suspension for his hit on Montreal Canadiens forward Jake Evans.

C/LW C.J. Suess: The fifth-round pick of the Jets is well-known to the organization, ready for his fourth full pro season after finishing his collegiate career with the University of Minnesota-Mankato Mavericks program. A diligent two-way player, Suess scored a nice goal with a quick shot against the Senators on Sunday.

C/RW Luke Johnson: The Grand Forks product played for the University of North Dakota and produced a pair of 18-goal seasons in the AHL. He’s also suited up for 32 NHL games with the Minnesota Wild and Chicago Blackhawks. He’s a point producer in the minors and has been used mostly in a fourth-line role in the NHL. Being a right-handed shooter who can play multiple positions will enhance his value to the organization.

C/LW Mikey Eyssimont: He’s got three full seasons in the AHL under his belt and was tracking for a third consecutive 10-plus goal campaign, were it not for the limited number of games played due to the pandemic. He’s got some puck skills and did a nice job of driving to the net to help create a goal on Wednesday.

RW Austin Poganski: In the minors, he plays a power forward game and there is a physical edge to him. He’s got one double-digit goal-scoring season in the AHL and has six NHL games on his resume with the St. Louis Blues. He was also a teammate of Johnson’s during the NCAA Frozen Four championship season and delivered a rebound goal in his Jets exhibition debut.

C/RW Kristian Reichel: He was a favourite of former Moose head coach Pascal Vincent for his hockey intelligence and ability to jump up and down the lineup at the minor league level. A nice blend of skill and defensive awareness as a prototypical late bloomer.

LW Jeff Mallott: The 25-year-old led the Moose in goals last season and was third in points, showing an offensive side of his game that wasn’t always evident during his four seasons with Cornell of the NCAA. He’s expected to play a prominent role in the minors, but earned a two-way contract during the off-season and is trying to plant a few seeds for later on.

Ken Wiebe covers the Winnipeg Jets for Sportsnet.ca and is a regular contributor to CJOB.