Archeologists in Egypt have discovered a 2,000-year-old mummy with a gold-tongue amulet meant to let the dead person “speak” — though hopefully not curse — in the afterlife.

Mummy curses are a purely tongue-in-cheek notion in 2021, but the discovery has nevertheless generated a flurry of excitement in Egypt and abroad.

Archeologists unearthed at least two mummies buried with the gold tongues in a poorly preserved crypt in Alexandria, the Egyptian Ministry of Tourism and Antiquities said in a statement. The mummies were found among 16 burial shafts at the temple of Taposiris Magna, which dates back to the Greco-Roman period some two millennia ago.

The tongues were a burial custom meant to ensure that individuals would have a tongue to speak with Osiris, god of the dead, in the afterlife, the ministry said.

Several other gold tongues have been found in the past, according to Jennifer Houser Wegner, curator of Egyptian artifacts at Penn Museum in Philadelphia. Her museum has a few of those tongues in its collection.

“For the Egyptians, gold was a material that had qualities of everlastingness,” she told the New York Times in a recent interview. “It never tarnished. It always shone brilliantly.”

The ministry says one mummy was decorated with tributes to Osiris. Another wore a crown decorated with horns and a cobra in the centre of the forehead. And a third had a falcon-head necklace representing the god Horus.

The expedition was led by Kathleen Martinez, an archeologist from the University of Santo Domingo. Martinez has been scouring the area for years in hopes of finding the tomb of Mark Antony and Queen Cleopatra VII.

Some coins depicting Cleopatra have been found at the site, which was built by one of her ancestors. The location of her tomb remains unknown.

Cleopatra was the last ruling member of the Ptolemaic Dynasty, a royal family that started with a Macedonian Greek general who served under Alexander the Great. The Romans absorbed Egypt into their empire after Cleopatra’s death, ending the Ptolemaic Dynasty after 275 years. 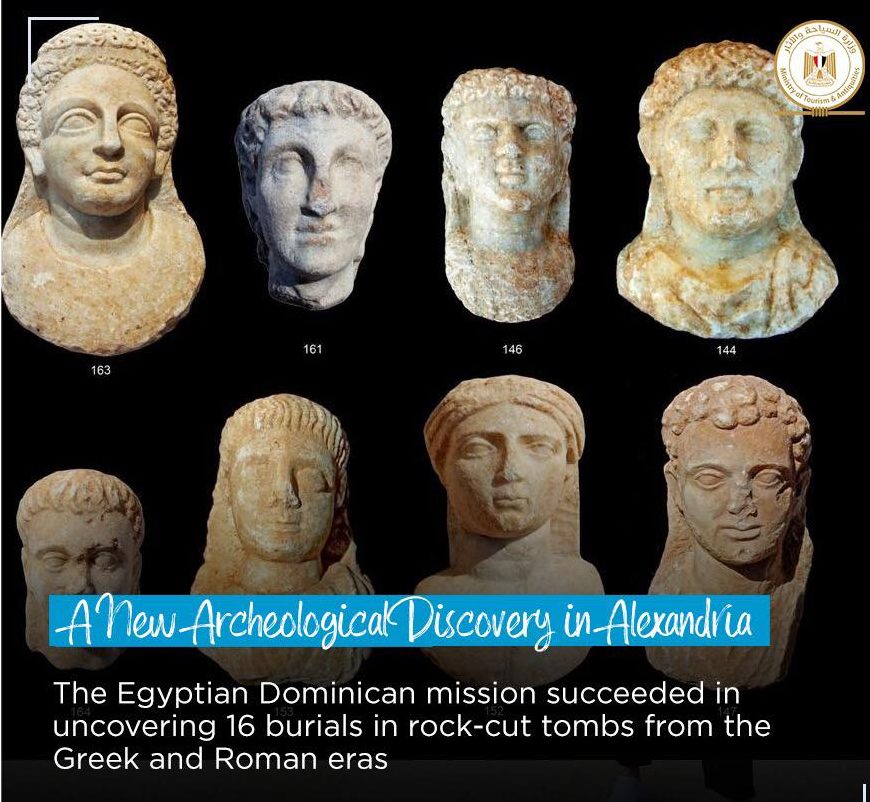 This captioned image shows several items recovered from the Taposiris Magna temple in Alexandria, Egypt. Archeologists say the masks found at the site were well-preserved, and offer a glimpse of the hairstyles that were popular at the time.

Excavations at the site are ongoing.