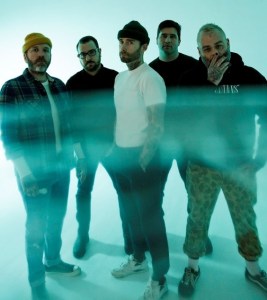 ALEXISONFIRE has announced select headline shows, to take place this January 2020 in Western Canada and Seattle, WA. The run kicks off January 20 in Winnipeg and includes stops in Edmonton, Calgary, and Vancouver with a final stop in Seattle on January 26. Supporting Alexisonfire on all dates are reunited modern day punk icons The Distillers who will co-headline the Seattle show. Montreal garage punk rockers NOBRO, hot off their national tour with PUP, will be opening all Canadian dates.

Tickets for all shows go on sale on Friday, November 22 at 10:00am local time. See below for all show dates and visit theonlybandever.com for direct ticket links. Alexisonfire have partnered with PLUS1 so that $1 from every ticket will go to organizations bringing dignity, equity, and access to communities who need it.

An official video for single “Familiar Drugs” directed by Michael Maxxis (who directed AOF’s personal favourite video for “The Northern” and City and Colour’s “Fragile Bird”, “Thirst”, and “Lover Come Back”) is available to watch HERE. The song was featured on Hockey Night in Canada earlier this year when the Montreal Canadiens, and Toronto Maple Leafs faced off.

On the heels of new music, AOF performed a handful of shows for lucky fans around the world, including one show in London, UK, and 2 consecutive nights each in New York, Los Angeles, and Toronto’s Budweiser Stage. Each of the first two dates in NY, L.A. and Toronto sold-out quickly with Alexisonfire having the distinction of being one of a handful of Canadian artists to perform two consecutive nights at the iconic Toronto venue alongside City and Colour, Drake, The Tragically Hip, and Sarah McLachlan. A highlight of the evening is when the mascot for NBA reigning champions The Toronto Raptors, aptly named The Raptor, kicked off the first show after Toronto’s Game 6 victory over Golden State the previous night.

Joining Alexisonfire as openers on all dates are modern day punk icons The Distillers and Montreal garage punk rockers NOBRO. Few modern day punk icons have not only embodied the genre so truthfully but also transformed the depth of what it can mean like The Distillers. Formed in 1998 in L.A., the cult-status band, featuring guitarist/vocalist Brody Dalle at the helm, returned to perfect punk form last year after reuniting and releasing their first music in 15 years. NOBRO, a self-proclaimed power trio of punk, garage rock babes, combines technical prowess and garage band aesthetics, using bass driven rhythms and heavy guitar riffs to underscore irresistibly catchy melodies.

Alexisonfire rose up out of the Southern Ontario underground in late 2001 to become one of the most successful indie bands to come out of Canada. AOF released four hugely successful studio albums, all Music Canada Platinum-certified: Alexisonfire (2002), Watch Out (2004), Crisis (2006), and Old Crows / Young Cardinals (2009). Crisis debuted at #1 on the Top 200 Soundscan (Canada), and Old Crows / Young Cardinals debuted at #2, and charted at #9 on the US Billboard Independent Album chart. Watch Out helped garner a New Group of the Year JUNO (2004). The band has topped charts and graced notable music magazine covers internationally. AOF’s sold-out 10 Year Anniversary tour (2012) touched down on four continents in 24 days, illustrating how meaningful the band still is to their legion of fans worldwide. Alexisonfire also has the distinction of being one of a handful of Canadian artists to perform two consecutive nights at iconic Toronto venue Budweiser Stage alongside City and Colour, Drake, The Tragically Hip, and Sarah McLachlan. In 2019, AOF debuted 2 new tracks “Familiar Drugs” and “Complicit” to the delight of fans worldwide. The impassioned banger marks the first time Alexisonfire has released new music in almost 10 years.

To call The Distillers simply a punk band doesn’t do justice to either the band or the word “punk”. Guitarist, lyricist, and vocalist Brody Dalle uses her medium as a platform for a higher plane of visceral lyricism and independence. Few modern day punk icons have not only embodied the genre so truthfully but also transformed the depth of what it can mean so thoroughly. Originally formed in 1998 in Los Angeles, the energetic band, with Dalle at the helm, released a string of damaged and powerful albums, EPs and singles with California punk labels Epitaph and Hellcat, then released their third masterpiece of an album, Coral Fang, on Sire before going on an untimely hiatus and ultimately splitting in 2006.  After breaking a 12-year silence on social media late last year, The Distillers returned, and In September 2018, the punk gods released their first singles in 15 years, “Man vs. Magnet” and “Blood in Gutters.”  The band is currently in the studio working on the follow up to Coral Fang with more to come throughout 2020.

Montreal garage punk/rock group NOBRO came together in 2014 with intentions to whip up raucous tunes that both shred and groove. These walls of gritty noise, fluttering riffs, high-energy vox and relentless rhythms are birthed through Kathryn McCaughey (lead vocals, bass), Karolanne Carbonneau (guitar, vocals), Sarah Dion (drums) and Lisandre Bourdages (master of percussion and keyboarder). Taking inspiration from attitudes and music like Betty Davis, Heart, Jay Reatard, NOBRO melds unbridled crass grit with melodic and soulful catchiness. In a perpetual state of experimentation, evolution and progression the constant trait that makes this group is their restless relentlessness.

PLUS1 is an initiative that channels the collective energy of a concert to catalyze social change. By partnering with performing artists, PLUS1 raises and grants millions of dollars to high impact nonprofits addressing our most serious global challenges around Access, Equity, and Dignity. The work begins with a $1 per ticket add-on that makes fundraising simple and seamless. Beyond the dollar, PLUS1 supports artists as educators and advocates, fuelling their passion, reach, impact. To date, PLUS1 has raised and granted over $7 million, and served as the connective tissue between over 100 artists, millions of their fans, and 100s of leading social justice organizations tackling global injustice.